TIME PRESENT AND TIME PAST

Through the sweet-briar, or the vine,
Or the twisted eglantine;
While the cock with lively din,
Scatters the rear of darkness thin.
Milton, ‘L’Allegro’ 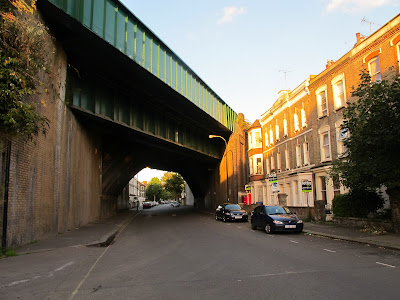 I believe I am coming up to my hundredth blog, though I admit the title ‘Weekly’ has been a misnomer lately. The truth is I have been leading a double life, which takes twice as long as a straightforward single one. I doubt that any of you lives such a simple thing as a single life, however blameless you may be.

I can’t walk or bus about London NW6 where I live without musing about the people who lived here before me and the delicious names of the places where they walked, so that I am half in the present and half in a series of pasts. Who could not wish that this dense, brick-built suburb of London still had a turning called ‘Sweetbriar Walk’, or that the young Queen Victoria could still be seen strolling between the hawthorn hedges bordering the meadows of West End Lane, having taken a drive in her horsedrawn carriage from her palace, up what was once the ancient Roman Watling Street. Walking to the Tricycle Theatre in neighbouring Kilburn the other night to see a play, in Kilburn High Road, aka Watling Street in fact, we passed a house where the Vorticist painter David Bomberg lived in the 20s and 30s, and I marvelled again, not only that this railway-riddled suburb was once the subject of Constable’s sylvan idyll with a shepherd lad, but that its dense regimented terraces of houses has not succeeded in creating regimented people.

If we think of West End Green as a suburban vortex (it began life as a village green and is now a traffic island for all its stately plane trees), then a mere 500 yards up the road there is a little vortex of history in our kitchen formed by three fridge magnets: Romney’s Lady Hamilton (fancifully portrayed at the spinning wheel), c. 1785; Bomberg’s ‘Mud Bath’ of 1914 – both artists we know traversed the Green; and our magnetic London Underground bottle opener, reminding us of West Hampstead’s Tube station opening as early as 1879, harbinger of Bomberg’s mechanized future which fractured Romney’s handmade past. 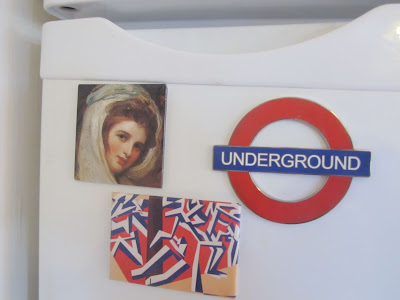 
As Ezra Pound, another quondam habitue of West End Green, put it: ‘All experience rushes into this vortex. All the energized past, all the past that is living and worthy to live. All momentum, which is the past bearing upon us, race, race-memory, instinct charging the placid, non-energized future.’

Kathleen Riley, who has been editing this blog from the other side of the world in Sydney, but is now here, walked with us into the grime and noise of nearby Kilburn High Road last night to see the Cold-War play A Walk in the Woods, and there we were in another past, the Geneva woods, fascinated by two nuclear disarmament negotiators, one Soviet, one American. We had done the same journey the night before to the Tricycle Cinema to see Woody Allen’s Midnight in Paris, which took us in enchantment to a world before the moon had been reached or The Bomb dropped.

As we walked back home we were not three minutes’ walk away at one point from the 1920s house where until only six years ago the Nobel Peace Prize laureate Professor Joseph Rotblat lived. Having worked on the Manhattan Project to create the first atomic bomb, he pulled out and eventually concentrated on harnessing nuclear radiation for medical purposes, meanwhile founding, with Bertrand Russell, the Pugwash Conferences, following the Russell-Einstein Manifesto of 1955, which sought to urge international leaders to resolve their disputes through peaceful means. 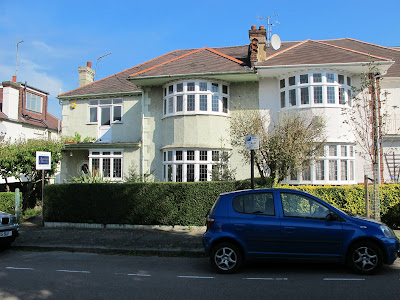 The ‘semi-detached’ house on the left is Rotblat’s former home in Asmara Road and the unlikely headquarters of the Pugwash Conferences.
Photo by EP

The week before we’d walked past the L-shaped Annesley Lodge on the corner of Platt’s Lane and Kidderpore Avenue, designed by C. F. A. Voysey in 1896, an Arts and Crafts breakaway from late Victorian brick-built conformity. Voysey’s father, the Rev. Charles Voysey, for whom the house was built, was also a breakaway from conformity; he was condemned by the Privy Council for heresy, having denied the doctrine of everlasting hell. What would he have thought of the unimaginable man-made hell, discussed endlessly in the Geneva woods and in the West Hampstead headquarters of the Pugwash Conferences? 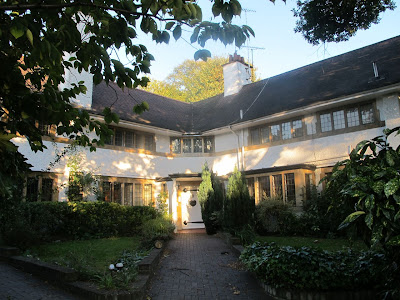 So you see we walk through our research every day as well as trawling the internet and delving into the archives of local history. Along the way we encounter poets, painters, parliamentarians and peace-brokers, magicians, musicians, magnates and modernists, conjurers, clowns and clerics, harlequins, hypnotists and heretics …

There may be no time like the present but the past is currently our parallel universe. This morning we even walked on a pavement bordered by a descendant of sweet briar on our way to the old railway sidings, now a Peace Park, where we read the words of a Mayor of Hiroshima inscribed on a paving stone. 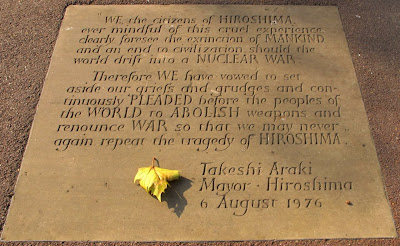 3 thoughts on “TIME PRESENT AND TIME PAST”