For years after I had played Vershinin in Three Sisters, one of his speeches would come back to me like a snatch of an old tune and I would speak it aloud wherever I happened to be:

I often think: what if we could, consciously, begin our lives anew. If only a life that had been lived could be the rough draft and the new one the fair copy. I think then each of us would try, most of all, to have a different setting for his life. He’d have a room like this with flowers and blazing sunshine. 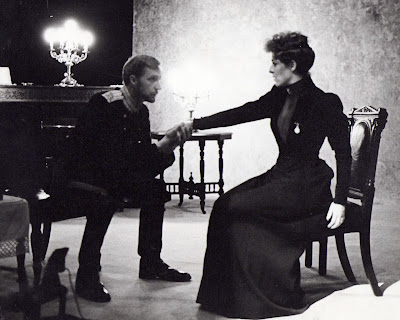 With Suzanne Bertish as Masha in Trevor Nunn’s production for the RSC’s first small-scale tour in 1978. Designed by John Napier.

I’m currently sorting and doing searches in the attic, in which some of you saw me rhapsodize despairingly in my webcam film, Aloft (aka Bringing Home the Bacon).
The question, ‘What would you change about your life?’ rings out of the jumble of my memory (an even more cluttered attic). It is in the voice of one Vernon Dobtcheff, film actor, who told me he’d used it successfully as an ice-breaker in the conversations we were both having one day with a party of Soviet artists and academics we were helping to escort round Hampton Court years ago. (I would change by developing an enthusiasm for filing!)
Apparently the director of the Moscow Art Theatre had said, ‘What would I change about my life? Everything, or nothing.’ You have to imagine the statement in a Russian accent, spoken by the interpreter. But the diminutive, melancholic Moscow professor gave the most candid reply. In his slow, lugubrious, accented English he said, ‘My wife, my job, my apartment.’
I have found a few scraps of paper dated Sunday 23rd July 1984, written when I was alone in the National Hotel, Moscow, Room 126, which I had to move out of because the water wouldn’t work. By impulse I was taking advantage of a week off from playing Faulkland in Sheridan’s The Rivals at the National Theatre. I had realized that I could change my life, at least for a week, and fly with ease the three-and-a-half hours to the capital of the Soviet Union, but more to the point to the very epicentre of what I was then working on in my spare time. Simon Callow and I were trying to write a play about the production of Hamlet (or Gamlet) that Stanislavski and Edward Gordon Craig had planned from 1908 and finally produced at the Moscow Art Theatre in 1911. 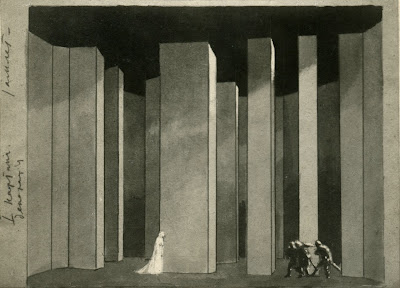 A contemporary impression of the first Ghost scene
Our separately composed scenes of the abandoned work lie in my attic, but here is the account of my arrival in Moscow in the summer of 1984:
The careful checks at the airport took about one hour, forty-five minutes, including the age it takes for one’s case to appear on those luggage roundabouts, identical in Japan, Malaysia, the USA – everywhere …
Caroline [Blakiston] had told me to expect birch trees. ‘Dear, modest birches, I love them above all other trees’, I had said as Chekhov’s Vershinin in Three Sisters – but the approach by air it seemed was all fir trees, a grandiose landscape of broad waterways and lakes with sprawling patches of dark forest and clearings where a neat control had been at work, communities of blocks of flats and adjacent, cut off by belts of trees, compounds of low dachas with garden plots in comfortable formation. There were isolated buildings in their own clearings; one I noticed had the unmistakeable green-blue square of a swimming pool. Later as we descended, groups of old wooden houses with steep roofs, little plantations and fields of crops, but mostly firs and water, then at last birch trees and the landing.
A small clapped-out Mercedes was my taxi – the radio removed, leaving a little hole. The thirtyish driver stopped for ‘Benzene’ at a very shoddy petrol station along the broad tree-lined road to the centre of Moscow – more fir trees and gradually more blocks of flats, the kind one imagines Moscow to have, but then suddenly at the corner of a big field near one side of the road, two men with a huge scythe and, on the other side, two men driving tractors – country and city mixed. Then older apartments with pediments and columns like old New York, and suddenly an exotically graceful Art-Nouveau block, obscured by trees, sped by – bus stops with huge shelters with a few waiting people, dressed as they might be in Camberwell. Now the road became enormously wide, the buildings set back and screened by trees, then yes! Glimpsed for a second an onion dome or two and some towers – Red Square? And a giant Russian version of a Victorian town hall – prosaic pragmatical building of a capital. 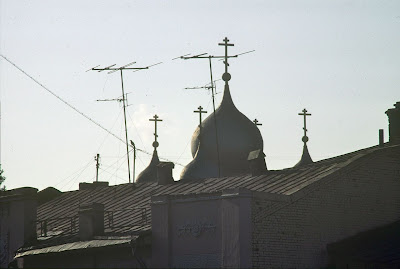 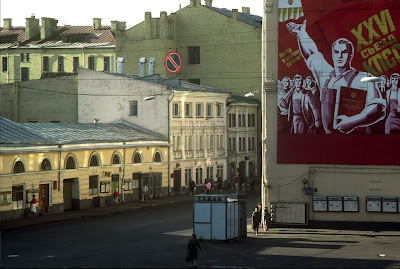 My diary scraps from the National Hotel continue:
I think I just heard the word ‘Britain’ on the hotel-room radio, followed by a slightly scratchy recording of Elizabethan music – all sackbuts and recorders, followed immediately by a French pop number.
My stroll up to Red Square started with a daunted look at the 50th Anniversary of the October Revolution Square. What did they pull down to celebrate the anniversary with this agoraphobic space across which little dots of cars speed alarmingly? What looked like a subway entrance turned out to be one, leading right under the square. This is the prelude to Red Square, not a hint of litter, graffiti or urine, not a poster of any description: part of the length mud, part white tiles and fluorescent lighting. I find I am walking behind four youths conversing in deaf and dumb language; they are wearing running shoes and jeans, but one has a very nice T-shirt, moccasins and the latest cut of lightweight trousers. Their movements in conversation are eloquent, dramatic, completely unselfconscious with the expressiveness that can only come of freedom and conviction. A marvellous chest-exploding gesture, like a heart burst, lots of combative gestures. I get halfway to the top of the stairs at Red Square behind them and they notice me, but continue their conversation. Suddenly, the most stylishly dressed boy looks straight at me and simply gestures, ‘Jeans? T-shirt?’ by subtly plucking his own garments between finger and thumb and looking questioningly at me. Having no spares, I shake my head, wondering what they might offer by way of barter. They go on smiling and conversing together.
A closer look at the odd group of onion-domed towers that is St Basil’s Cathedral, the twirly painted flowers on the walls. It has the mystery that all good buildings have – no logic perhaps, but somehow you can’t argue that it isn’t the perfect set of masses. I long to go in, but it is firmly locked. Another time perhaps. 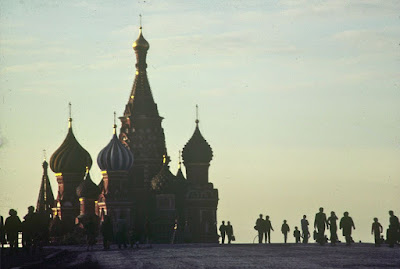 Remembering back now, I made a friend in Henrietta Dobryakova, then a curator of the MAT Museum, who helped me trace so much intriguing information. We would take breaks together on the stone landing of a staircase where she would offer me Soviet cigarettes whilst telling me stories of the high security surrounding Stalin’s twenty visits to see Stanislavski’s production of Bulgakov’s The White Guard, which I could have seen certainly once more in the recent production at the National, so much did it seem like a visit to early nineteenth-century Russia. The theatre’s stage was going to be gutted and modernized. The builders were at work already. One day, Henrietta and I stood on the darkened stage and peered out into the auditorium, seeing nothing, but at least we were standing upon the boards, soon to be torn up, which had been graced by the legendary first productions of Chekhov, and had carried the experiment of the Craig-Stanislavski Hamlet of 1911.
Here, under the scaffolding, you can see the façade of the Moscow Art Theatre, with its famous seagull emblem. 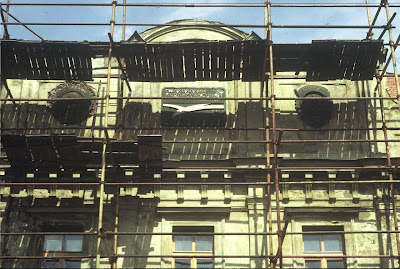 And here is an image of B. M. Alfonin as Lucianus, the posioner, in the Craig-Stanislavski Hamlet. It is a role I played at Northampton Rep in 1958, just two months before I saw the Moscow Art Theatre perform The Cherry Orchard at Sadler’s Wells. 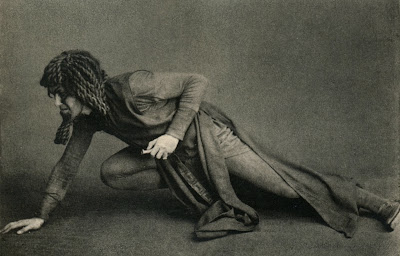 Something I had forgotten is in the scraps of paper:
The customs lady was a young Russian beauty – short blonde hair, dark eyes with dark make-up; a self-contained beauty, sure of her rhythm, steady as she used economic gestures to bring the already cringing tourists to heel. The elderly Midwestern American doctor, ahead of me, arrived for a health conference, had already perspired and gasped as he misunderstood every gesture of the uniformed customs man who signalled his orders, his misconstructions leading him to perform ludicrously maladroit and servile actions, after which he had to mop the inside of his big beige hat. The blonde beauty coolly brought him to order with a tap of her Biro and then perused his medical brochures for subversive material and scanned every page of his newspaper.
I had a copy of Hamlet in Moscow and she looked at the title page. Was the publishing house on the black list, the author a known reactionary? She even sampled two or three bits of text – for anti-Soviet sentiments? At last, with a sideways movement of her hand measuring six inches, she waved me on and I felt clean and fit for Moscow.
On the flight back to London I sat once again with the distinguished Nigel Nicolson of Weidenfeld & Nicolson. Our small talk was halting; no doubt I seemed to him as green about literature and publishing as he did to me when he attempted to stray from his speciality, though his achievements were obviously wide and his social sphere stratospheric. ‘Does the director’, he asked, ‘demonstrate how he wants the lines to be said?’
It wasn’t until some time later that I saw a film of the Soviet director Yuri Lubimov rehearsing the English cast of Crime And Punishment at the Lyric Hammersmith, doing just that and demonstrating the business too. The romance of Russian theatre took a knock, as it still does when I read of Stanislavski, working on the script of The Seagull in isolation, ahead of rehearsals, and prescribing the number of seconds per pause – I would have perspired inside my hat!

* The photographs above are among several I took on that trip in 1984 – I may find more!