In the garden under the sunshade on another ‘perfect’ summer Sunday morning. I am wearing black — not in mourning; a white shirt would reflect on the laptop screen. But there may be sadness today because … that’s it — a mere five weeks including previews and The Fantasticks has closed. We had a torrid valedictory party in the subterranean stalls bar last night after the show, bravely keeping our cool.
Mind you, forty performances would be a respectable tally at the National Theatre in repertoire, but respectable was not the word for the size of our audiences in the Duchess’s 479-seat auditorium. I have always admired John Peter, the critic for The Sunday Times, but, though there might have been others like him who wanted to bite off their kneecaps for distraction, over this last fortnight — give or take the odd, oddly muted house — the joyously responsive audiences were a great pleasure to play to.
The youth of these audiences made me suspect that, despite the gorgeous summer evenings, the drama schools were responding to the offer of complimentary tickets. Indeed, coming late out of the stage door one night, I met two RADA students and their young producer friend (blond, and handsome enough for a heartthrob leading juvenile himself). ‘What are you doing here?’ I asked them. ‘Talking about the show’ was their reply, so I joined the discussion, confessing that, for me and Paul Hunter, the somewhat surreal second act, apart from our first scene in it, was a chore. It has to be said that one distinguished actress, loaded with awards, told Clive Rowe that she liked the second act best, but that another, a sometime leading actress with the RSC, met Paul after the show and remarked that watching the second act was like being on drugs. It strikes me now that, not since I was smuggled on to the stage in Peter Brook’s Seneca’s Oedipus to join the final rave-up round the six-foot golden phallus, as a brass ensemble played ‘Yes! We Have No Bananas’, have I struggled so hard to lend inner conviction to the inexplicable. I should have told the students that: it’s just the kind of eccentric reminiscence from a veteran actor that may be in short supply at drama school.
I did say I was amazed that Tom Jones, The Fantasticks’ author and lyricist, had returned to the off-Broadway cast (playing my part of the Old Actor), thirty years after his first run at it, and not re-written the second half to give himself and his sidekick, Mortimer, a decent and meaningful exit from the play. I have to take blame or credit for contravening Hamlet’s advice to the players (he is a prince and an amateur, so what does he know?): ‘Let those that play your clowns speak no more than is set down for them’. I think Paul and I should have received cash in brown envelopes for our enhancement of our parts: There is a legendary credit in the 1929 Hollywood film starring Mary Pickford and Douglas Fairbanks:
The Taming of the Shrew
by
William Shakespeare
Additional dialogue by Sam Taylor 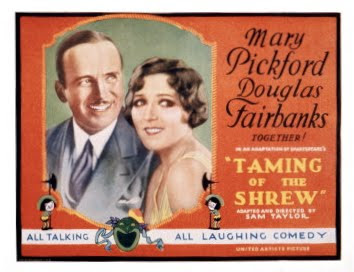 I prefer to think of our extra-textual and -terrestrial contributions (‘Dress the stage’ is, after all, Henry’s advice to Mortimer) not as overstepping the mark, but in biblical terms: ‘And whosoever shall compel thee to go a mile, go with him twain’. One of my fondest memories is of Paul, dressed in lace curtains and string vest as ‘an Indian’ (i.e Native American), with kitchen utensils rather than scalps hanging from his belt, applauding the theatrical death of El Gallo and then, realizing he is superfluous to requirements, dying himself. I still believe in the precipice he plummeted down, but, more than that, his clown was a real being, a being I never talked to in real life, but we communicated on stage and much of what happened between us was the result of his inspired improvisation — rarely did we plan or amend in cold blood. I remember him describing the difficulties of our entrance from the box, and (even more difficult) our entrance into the box to get out of it, as ‘not a precise science’. But from the moment we began to rehearse together, this entrance took on a mysterious life of its own and our relationship was forged through it, something we have to thanks Tom Jones for despite our Sam Taylor interpolations. Beckett and our double act have been mentioned more than once in the same breath. 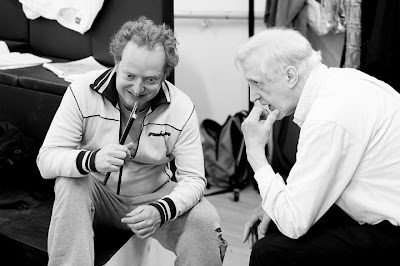 Paul Hunter and myself in rehearsal.
As I woke up this morning, I still had to turn on Radio 3 to silence the insistent tunes from the show going round in my head, but the pure fresh memory of them remains, especially the moment I was arrested in the doorway of the rehearsal room and moved to tears by the opening, by Hadley Fraser’s infinitely tender ‘Try To Remember’ and the cast poised in a perfect moment of infinite possibility.
Sentiments for THE FANTASTICKS last night
26th June 2010
Each Pierrot has his personal moon
Each Columbine and Harlequin and Pantaloon
Knows too well the lunar wax and wane
Triumph and disaster, loss and gain
They never lose a sense of glad surprise
That fortune, though it sinks,
Can also rise
That even as it fades away, the dream
Carries still a substance that can gleam. 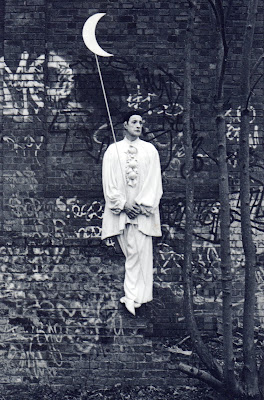 11 thoughts on “TOMORROW TO FRESH WOODS AND PASTURES NEW”