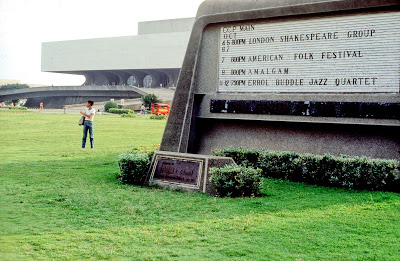 We do on stage things that are supposed to happen off. Which is a kind of integrity, if you look on every exit as being an entrance somewhere else.

ROSENCRANTZ AND GUILDENSTERN ARE DEAD

We have been crowded out of our house by the boxes and our last week or so as residents of London is to be spent in our local Marriott Hotel.

This is Swiss Cottage as one does not know it; of course the Marriott claims Regent’s Park in its title and there are Primrose Hill Teas to be had in the afternoons. The last time we moved house and into a hotel was thirty-three years ago when we left our Kilburn flat and flew straight to Manila, having left the key with the estate agent. We (as part of the London Shakespeare Group) were to play Twelfth Night in the huge main theatre, part of the Cultural Centre of the Philippines that Madam Marcos had instigated in the late 60s in the grounds of a large, rather deserted park. There were dark stories about the haste in which the whole project had been constructed. Tonight at supper, by strange coincidence, our waitress was from Manila.

I mentioned a couple of weeks ago that Emily and I had, on that same British Council tour of the Far East, performed in Hiroshima. A few days later, whilst sorting and packing, I discovered Emily’s Japan diary and saw from it that we took possession of our house in West Hampstead the day before we arrived in Hiroshima.
A lady from the Council called at our house today and spent three minutes looking at the rear of the property. These terrace houses are all constructed identically but I suppose Camden keeps a watchful eye on developments and our buyers are certainly going to make structural changes – built to last. So I know that this year’s crop of ripening grapes in our little conservatory is the last.
Loose Ends
I sit here, my mind churns and prattles
And chatters of goods, endless chattels
What can it portend
When each odd and end
Enslaves me and signals more battles?
Oh to spirit or give them away
Realizing that blessed new day
Free from this tittle-tattle
No need then to tackle what package or pack’ll
Prevent breakage or rattle
Oh that day my back’ll
Sing songs voiced through each vertebrae!
Click here to cancel reply.