She looked at the canvas; it was blurred with a sudden intensity, as if she saw it clear for a second, she drew a line there, in the centre. It was done; it was finished. Yes, she thought, laying down her brush in extreme fatigue, I have had my vision.

Virginia Woolf, To the Lighthouse

This particular vision, not quite finished but still a work in progress, is an illustration for NW6 and All That, the book Kathleen and I are writing about West Hampstead. I began the painting two or three weeks ago in the belated blaze of spring, working occasionally en plein air in our suburban patch of Eden. 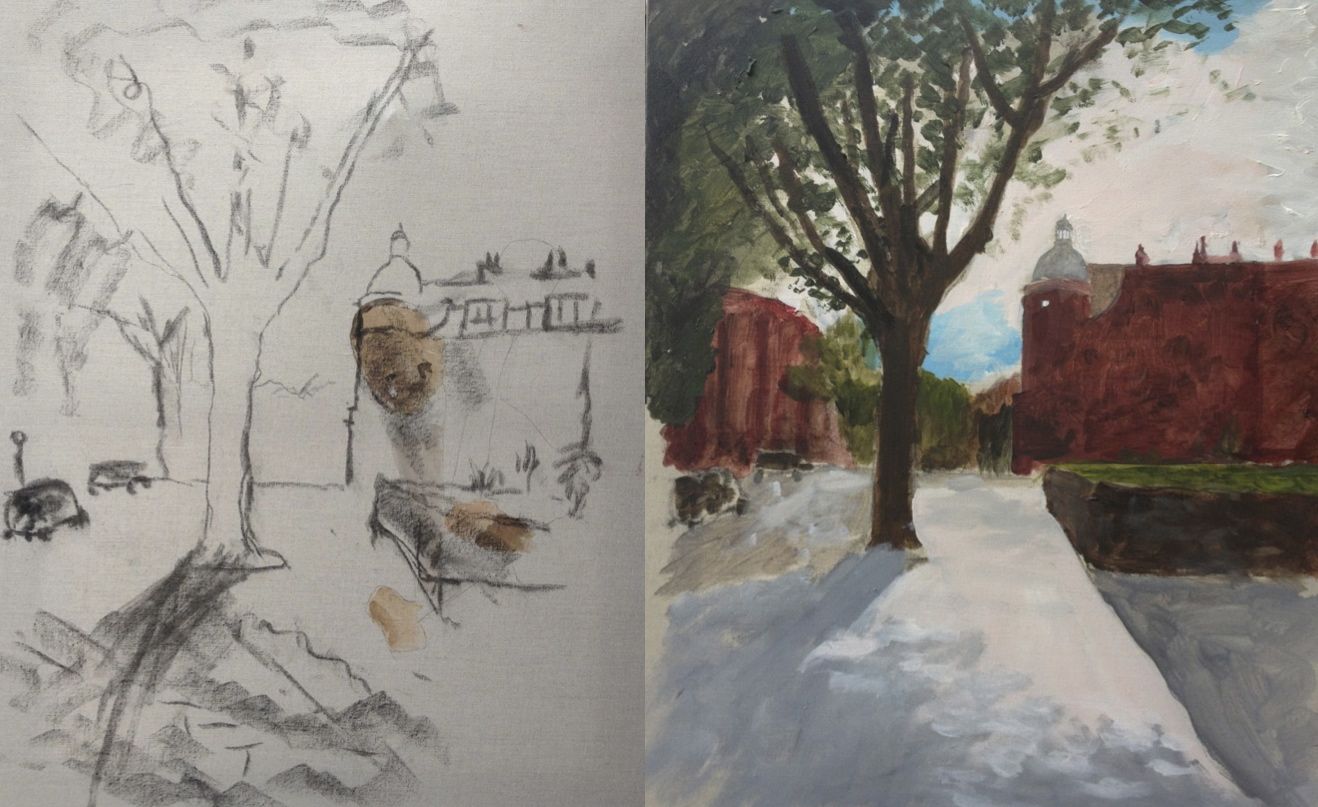 I based the composition on a photograph I took from the vantage point of Heath Drive, NW3, looking across the busy intersection with Finchley Road to the top of stately Cannon Hill. The domed and redbrick building is Avenue Mansions, built in the year of Queen Victoria’s Diamond Jubilee, when Heath Drive was still known as West Hampstead Avenue. Bean ‘modelled’ for the dog in the foreground.

Lower down Cannon Hill are Malborough Mansions whose distinguished residents have included the painter Sir William Coldstream, the conductor Sir Adrian Boult and the novelist Nigel Balchin who coined not only the brand name Kit Kat but also the terms ‘boffin’ and ‘backroom boys’. In the same street lived the eminent Victorian geologist Henry Bolingbroke Woodward and his artist daughter Alice, who produced the first illustrated version of Barrie’s Peter Pan. And at the bottom of Cannon Hill, on the corner of West End Lane, was the beginning of West Hampstead café society, a small establishment opened in 1884 as part of the temperance movement’s revival of the London coffee-house scene.

And now, by way of a sneak preview of our book, Kathleen will tell you about an interesting literary figure who spent an idyllic Edwardian childhood in West Hampstead Avenue and knew intimately the thoroughfares of Cannon Hill and Kidderpore Avenue (home to the wealthy dye merchant Charles Cannon who, in the 1870s, converted an old footpath into Cannon Hill).


The extravagantly named Vivian de Sola Pinto (1895-1969) was a leading scholarly authority on D. H. Lawrence and appeared for the defence in the Lady Chatterley Trial. He had been Siegfried Sasson’s second-in-command while they served with the Royal Welsh Fusiliers in France during the First World War and he appears as ‘Velmore’ in Sassoon’s Sherston Memoirs. He was also a friend of the Sitwells and Robert Graves and moved very much in the artistic and cultural circles of the high modernist period.

He grew up in a house called ‘Heathcroft’ in West Hampstead Avenue, which, thanks to a petition organized by his father, a tobacconist in St James’s Street, was rechristened Heath Drive – a subtle metamorphosis that, together with trees being planted by the council and a possible adjustment in postcode, allowed residents north of Cannon Hill to escape the ‘ignominy’ of being part of West Hampstead, NW6.

Amazingly, he was living round the corner almost from ‘Derwen’ in Hermitage Lane the night a young ‘unknown poet’ from the Black Country, called Lawrence, read some of his own verses to a gathering that included Ezra Pound and W. B. Yeats. 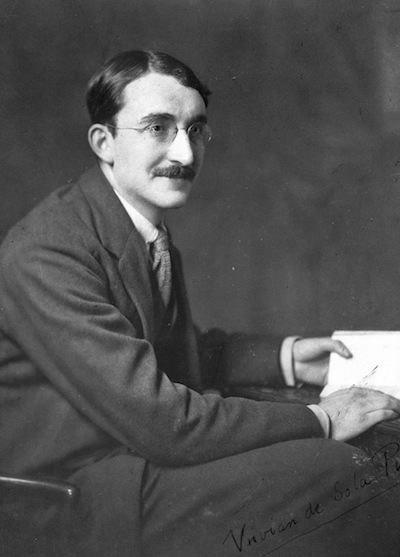 In his memoirs, The City That Shone, Pinto describes the bucolic beauties surrounding and just beyond ‘Heathcroft’ and an epiphany he experienced one sunset, looking out over the rooftops of West Hampstead. But he also describes the sidings, bits of suburban waste land, new mansion blocks, and ‘glimpses of the great world of the Poor which surrounded on every side the comfortable island of bourgeois security’ on which he lived. His is thus a unique account of how, as late as 1905, the old rural hamlet of West-end and the new railway suburb of West Hampstead co-existed. Here is just a sample of his vivid prose poem to a vanished world:
On the ‘other side of the road’, as we called it, i.e. the side opposite to our house, there were, in those days, open fields where cattle grazed. They were separated from the road only by a wooden fence over which a very small boy could easily climb. Beautiful undulating meadows, they were full of deep grass with plenty of buttercups, dandelions and daisies in the summer and shaded by hawthorn bushes, great oaks and elms. In my early boyhood ‘the other side of the road’ was an enchanted country for me, where I could wander through acres of unspoilt meadow land and enjoy the thrill of squeezing through gaps in hedges and climbing over stiles to find myself in new and exciting surroundings. I can still shut my eyes and dream that I am lying in the deep grass of those meadows on a summer day and listening to the hum of insects, the crowing of distant cocks and other pleasant country noises. …

It was a fine evening in early spring and I was walking down Heath Drive with another child, probably my sister … There was a fine view to the west across the house-tops of West Hampstead and Kilburn with the usual grey haze over London, and above it the glowing splendour of the setting sun. In that grey hazy distance illuminated by the soft sunset light I saw a vision enclosed in a kind of circular frame. I described it to myself as a shining city full of people moving about among wonderful, coloured flames, though I knew that this was wholly inadequate description. I did not merely see this place but I seemed to be in it and to be actually close to the ‘shining people’ and one of them.
KR 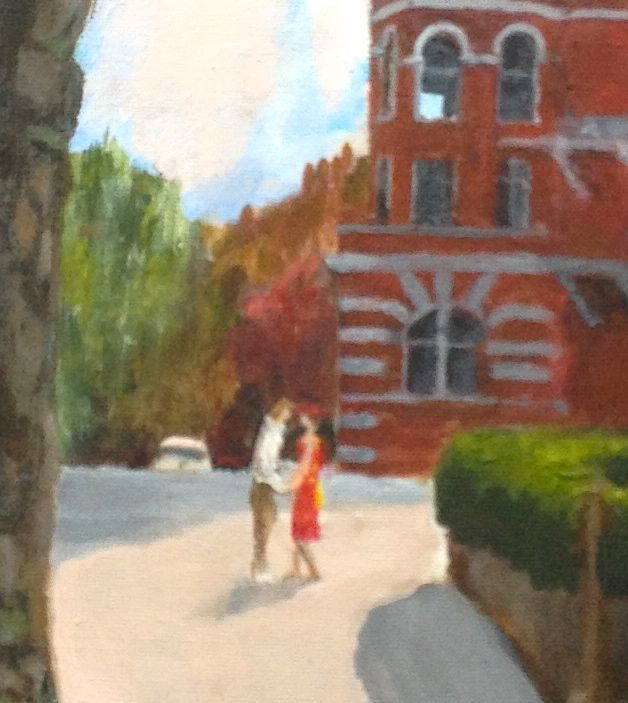 One thought on “VISIONS AND VISTAS”