VOICES ON A WARM OCTOBER NIGHT

There is no index of character so sure as the voice.
Benjamin Disraeli

October 1st, 2011: I took this photograph on my iPhone just after 7 o’clock this evening, so you see how our London nights are drawing in, though our day was perfect, breaking all records for October – and it promises to be at least 80 degrees Fahrenheit again tomorrow. This corporate steel and glass rises at the junction of Hampstead Road and Tottenham Court Road.

Its humble nextdoor neighbour is a modest brick building with a door leading to a tiny fringe venue, the Camden People’s Theatre, where a company called Improbable were doing the second of two nights of their latest improvised experiment in The Still.

I had a particular reason to talk my way into tonight’s sold-out performance; I had met the director Phelim McDermott at the nearby Pret a Manger for lunch yesterday along with Paul Hunter, my clown companion in The Fantasticks. We were discussing the forthcoming workshop Paul and I are doing on the subject of King Lear, and hoping Phelim would be able to join us in our experiments. 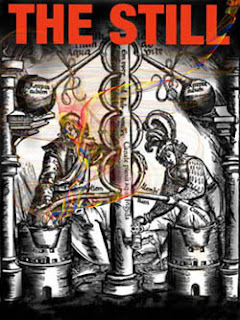 As it turned out, tonight was more relevant than I could have hoped because the noted ‘Voice Dialogue facilitator’, John Kent, was interviewing the voices of the actors … well, I gather we might all have many voices, many people that we are, but it was fascinating to hear improvised interviews with two selected selves of each actor, as they strove to explain their function in, and their relationship with, the lives of the main self (whose seat was left vacant whilst the other self stood aside and did the talking, if you take my meaning.

According to Improbable’s website: ‘Pioneered by Drs. Hal & Sidra Stone, Voice Dialogue is a revolutionary process that allows us to become aware of the many different selves that influence the course of our lives.’ This technique is used in the corporate world of glass and steel as well as in experimental fringe theatres.

There was, of course, a more successful element of performance, not to say comedy, in the excerises than one might have expected had we been next door with executives on a development course. Even Matilda Leyser’s baby to be was a prominent character. Phelim’s two poles were a rather puckish, sly mischief and a hangdog shamed reluctance; hers, no less physically manifest, fidgety retreats into laughter and four-square, no-nonsense career woman. But, despite this element of performance, there was a sense of honest inquiry and revelation in the experimental proceedings.

I began to wonder to what degree a king might be himself part-fool and take the advice and criticism the fool is licensed to give, and conversely, a fool part-king. Most of all I began to wonder about the authentic voice, which of one’s many voices was the one to be attended to. For the actor, when attempting to take on the mantle of another person, the problem is further complicated. I found the authentic voice so difficult to find as I sat at my kitchen table saying Lear’s lines, attempting to honour the poetry, the rhythm and yet discover, too, the cadences of ‘natural’ speech, in fact to make King Lear – as I might say – one of me.

My work on King Lear was begun whilst there were snowdrops in Hampstead Churchyard in very early 2007. Hence this rejected attempt at fulfilling a commision to supply my Lear in image form for publicity purposes before I quite knew who he was.

I am intrigued by news of some distinguished voices that sounded just ten minutes’ walk away from my kitchen table, and not far from Hampstead Churchyard, albeit a century ago. Ernest Rhys, founder of the Rhymers’ Club and the Everyman’s Library of classics, recorded this extraordinary tale of a most memorable literary encounter in his West Hampstead home:

At our house in Hermitage Lane – called ‘Derwen’ after the old oak tree staring in at the window – to which we had moved from Hunt Cottage, we often had gatherings of young poets, resuming the nights at the Old Cheshire Cheese of the Rhymers Club. …

The most memorable of these nights was one when the late D. H. Lawrence, then a completely unknown poet, came with Ford Madox Ford (who was editing the English Review). He had written to say he had discovered a wonderful new poet in a young country schoolmaster somewhere in the Black Country, and wished to bring him along. …

When the two entered the room together, they made a strong contrast. Ford always had the air of a man-about-town used to town occasions, while Lawrence looked shy and countrified; perhaps a little overwhelmed by the fanfaron of fellow poets heard in the room, with W. B. Yeats and Ezra Pound dominating the chorus. …

During the supper, Yeats, always a good monologuer, held forth at length on this new way of bringing music and poetry together, and possibly Ezra Pound, who could also be vocal on occasion, may have felt he was not getting a fair share of the fun. So, in order to pass the time perhaps, and seeing the supper table dressed with red tulips, he presently took one of the flowers and proceeded to munch it up. …

The plan of entertainment on these occasions was a simple one. Every poet was supposed to bring an original poem and read or declaim it aloud. Willie Yeats was a capital opener of the feast, and that night we asked him, as he said he had no new verses to read, to recite ‘The Lake of Innisfree’; but he said he was tired of that lovely lyric, and read us instead a later one which begins:

‘She lived in storm and strife,
Her soul had such desire
For that proud death may bring …’

Rhys continues his account of the evening at some length and says that Pound, sounding like Henry Irving with an American accent, declaimed his Ballad of the Goodly Fere.

I sat at my own kitchen table and listened, via the online Poetry Archive, to Yeats intoning ‘The Lake Isle of Inisfree’ and Pound his Cantos. They both seemed to believe that poetry came from a different place and had to be chanted with fulsome vibrato and a small range of notes as in an incantation or prayer. I now wonder, as they slipped in and out of this manner of speaking round the supper table, if they consciously became at one moment The Poet and at another the man again. Nowadays one would be embarrassed to be caught out speaking in a ‘poetry voice’. But isn’t it strange that grown men of genius could sit round a table and allow the poet in them to speak so portentously, religiously when we know that the poems are much nearer to our common lives than that, and sound, for all their word music and wonder, just like the real us.

4 thoughts on “VOICES ON A WARM OCTOBER NIGHT”