A TURNERESQUE TOUCH OF LIFE AND LIGHT

The other day, on the way home from an audition in town, I went to the big Turner exhibition at Tate Britain. His canvases are hung with an impressive array of the Masters and contemporaries he emulated, rivalled and ‘sought to outdo’: Rembrandt, Claude Lorrain, Titian, Poussin and Canaletto to name but a few. An extraordinary privilege to have such a sumptuous display a mere Tube ride away.
Turner’s seascape, ‘Helvoetsluys’ is there, the canvas on which, famously, on varnishing day at the Royal Academy, he added a finishing touch of red in the form of a floating buoy near the centre. Now the canvas hangs again next to Constable’s ‘The Opening of Waterloo Bridge’ for the first time since that original exhibition in 1832, when Constable declared: ‘Turner has been here and fired a gun.’ I had heard the tale but here was the ‘reconstruction’. It is one of the curator’s more dramatic coups. 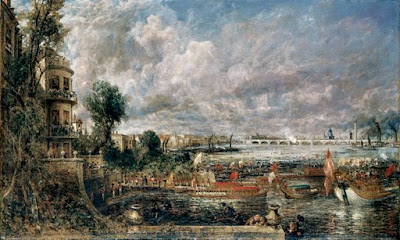 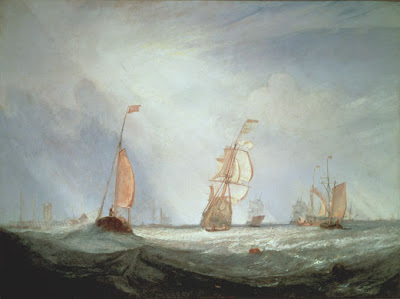 One is sometimes tempted to compare Turner’s efforts unfavourably with the Old Masters, realizing that they weren’t called Masters for nothing, and then one is astonished to see the matter quite the other way round, finding perhaps a Turneresque touch of light and life that renders an Old Master almost academic, until one’s eye falls on one of Turner’s trees, clearly an amateur botch compared to the painter next along; then one realizes that the ‘superior’ trees are Turner’s too.

I will have to go again, spend longer, and practise a more sophisticated response to this exhibition which would astonish any one of the artists if they could only come back to see it. For those of us who can see it, spoiled as we are by the familiarity that comes with the rich hindsight the galleries now bestow, and the availability of superb books of reproductions, perhaps it’s necessary to practise being freshly astonished ourselves.
Meanwhile, certainly not rivalling anyone, but emulating the artist I have just played, Donner in Stoppard’s Artist Descending a Staircase, I look askance at ‘his’ – my – Sophie and the unicorn each day, and promise myself to finish the ‘unfinished’ painting – say by the end of next week. It will make an illustration for the diary I kept whilst doing the play, as well as being, I suppose, the first realization of the picture, which was first ‘seen’ on the radio, and certainly appeared with its back to the audience in our staging.

One thought on “A TURNERESQUE TOUCH OF LIFE AND LIGHT”