Driven on the wind that sweeps the gloomy hills of London,
Hampstead and Clerkenwell, Campden and Putney,
Highgate, Primrose and Ludgate. Not here
Not here the darkness, in this twittering world.
T. S. Eliot, Four Quartets

Amongst the notable former residents of West Hampstead Kathleen and I have discovered, in researching our local-history slim volume, is Sydney Olivier, the first Baron Olivier, Secretary of State for India in the first Labour government, and uncle of Laurence Olivier. We lighted upon the fact of his one-time residency of NW6 in a letter he wrote to H. G. Wells in 1906 when the two were working together to amend the basis of the Fabian Society. The letter is headed 12 Dene Mansions, West Hampstead. This block of flats replaced Laurieston Lodge, which once housed Sir William Woods, Garter King at Arms, in the days when Queen Victoria took her country walks in West End Lane.

At the time, Olivier was Principal Clerk of the West African and West Indian departments of the Colonial Office. Soon after he was appointed Governor of Jamaica. With Bernard Shaw and Sidney Webb, Olivier had been a member of the Hampstead Historical Club (previously the Karl Marx Club), and Shaw writes a vivid appreciation of his friend and fellow Fabian:
I first met Sydney Olivier when we were both in our twenties, and had from different directions embraced Socialism as our creed. I had come by the way of Henry George and Karl Marx. He had begun with the Positivist philosophy of Auguste Comte, and was as far as I know, the only Fabian who came in through that gate.
He and Sidney Webb, Comtist at second hand through John Stuart Mill, shared the duty of resident clerk at the Colonial Office. … There was no question then of peerages to come for either of them: by plunging into Socialism they were held to be burning their boats as far as any sort of official promotion was concerned, though as founders of Fabian Socialism they soon took The Cause off the barricades, and made it constitutional and respectable.
Olivier was an extraordinarily attractive figure, and in my experience unique; for I have never known anyone like him mentally or physically: he was distinguished enough to be unclassable. He was handsome and strongly sexed, looking like a Spanish grandee in any sort of clothes, however unconventional. …
Though Olivier came to positions of authority by sheer gravitation, he could never have become a popular idol, because his mental scope, like that of a champion chess player, enabled him to see the next five or six steps in an argument so clearly and effortlessly that he could not believe that anything so obvious need be stated. …
This excess of mental and muscular power was accompanied by an excess of nervous power which hampered him as a public speaker. He spoke only on special provocation, and always had to wrestle with his speeches rather than deliver them comfortably. I once asked the chief of the Observatory on Mount Vesuvius why the energy wasted by the burning mountain was not utilized for industrial purposes. He replied that there was too much of it to be manageable. That was Olivier’s case.
I have painted a new portrait of my neighbour, the former Indian Army officer. Oliver Cox was a captain in the Bengal Lancers from 1940. He was born in the Azores to missionary parents around the time Sydney Olivier was elevated to the peerage by Ramsay MacDonald. But temperamentally he was not a socialist, judging by his attitude to the trade unionists whom he encountered in his work in English factories in his teens, before embarking on his military career. He says he was criticized for working too fast. 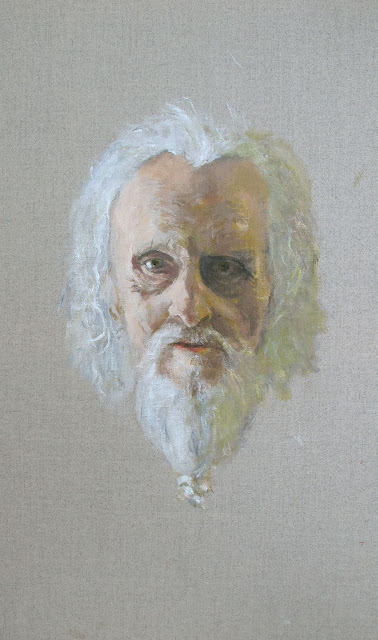 But if there is little of the Fabian in our Captain Cox, there is perhaps something of the wild colonial boy. According to an article in the Camden New Journal in 2008, he was a crack shot with a pistol and used to cook grey squirrels in a casserole when he was living off the land in Cheshire. He responded to this article with some indignation:

SHOCK was my reaction to the inaccuracy of John Gulliver’s article (Squirrels are the dish of the day, November 6). I was in the Bengal Lancers (not the Bengali Lancers, as you misquoted). Furthermore your reference to my “enjoying them in the woods near Paris” still carried the subject the grey squirrel, rather than referring to my last sighting of the European Red. Oliver Cox, NW6