WHILE THY BOOKE DOTH LIVE, AND WE HAVE PRAISE TO GIVE

I am remembering one of Shakespeare’s birthdays: a party in 1967, aloft in the Old Vic rehearsal room after a matinée. It was attended by us National Theatre actors, now so recently the resident company. We felt, I think, rather up to the moment (we had done a matinée of Zeffirelli’s audaciously colourful and riotous production of Much Ado about Nothing, or possibly Stoppard’s first astonishing hit Rosencrantz and Guildenstern are Dead*). And we were, surely, superior to the elderly eccentrics of the Vic-Wells Association who were throwing the sedate little party – ladies in lisle stockings, wearing ancient cloche hats and carrying capacious carpet bags, redundant figures now that the Arts Council was doing the bankrolling and there was no need of their fundraising whist drives.
Robert Atkins, the veteran actor and indeed director of the Vic in Lilian Baylis’s time, told a story about playing the doctor in the sleepwalking scene in Macbeth, the chief feature of which, in the particular performance he described, seemed to be a row between Baylis and the actor playing Macbeth. The commotion took place along the back of the stage, disturbing the backcloth, and ended with Lilian calling from the wings to Atkins in a stage whisper: ‘It’s alright, Robert, you’ll have it quiet now.’ It painted a positively Crummlesian picture of the revered Old Vic of the 20s and 30s.
Ron Pickup and I got disgraceful giggles at the serious bits of the speeches, and then quite suddenly a summons called us all to order and somebody, standing next to a grey, rather grubby plaster bust of William Shakespeare, decked with a wreath of fresh laurel round its neck, bid us raise our glasses ‘To the Immortal Memory’. Tears came into my eyes. Everyone in the room fell silent. I still feel the intense poignancy of that moment forty-three birthdays later.

Our own Birthday Bard. 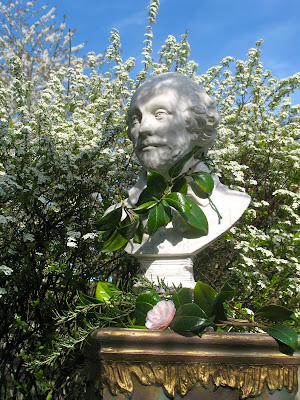 Picasso did a doodle for the 400th birthday. It seemed rather trendy at the time. 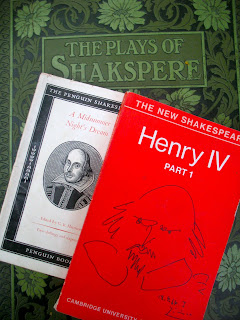 * Another recent anniversary, incidentally: the 11th April marked forty-three years since the opening night at the Vic of Rosencrantz and Guildenstern are Dead.