I don’t think I could have got through this last week were it not for CoQ-10.

British doctors tell you – have told me – that I was not suffering depletion of energy as a result of taking statins to lower cholesterol, and they have religiously insisted that I must take them. But there is research that suggests one’s capacity to produce energy is, in fact, impaired or inhibited by statins, since Coenzyme Q-10 (a vital energy nutrient) and cholesterol share the same metabolic pathway. There are websites that will put it more scientifically than I can.

Luckily a friend put me on to CoQ-10 supplements and the chemist stocked them and within a week I was beginning to feel a difference. This last week I have been spending time by day in a recording studio and by night (plus two matinées) in the theatre: eight performances of The Fantasticks and twenty hours reading Jill Paton Walsh’s new Peter Wimsey novel, The Attenbury Emeralds. Now reading into a microphone for over four and a half hours with very short tea breaks is quite demanding when there is nobody to share in the dialogue or narration of a book. To get it finished I read for seven hours on the last day, Friday, and would have walked, as I had done every other day, from Goodge Street to the Duchess Theatre had the rain not forced me to take the Tube part of the way. (The book, incidentally, is remarkable for chronicling a Tube journey that Lord Peter and Harriet take to Woodside Park in the northern suburbs.) 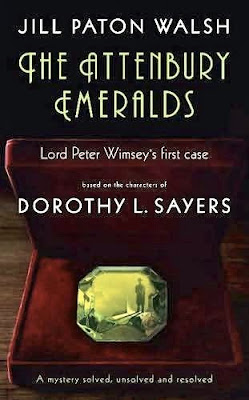 Emerging from the basement studio into the lovely sunlight of the street had been one of the treats of my daily routine up till then. The exercise was welcome and my head was full of echoes and images of 1950s London, the setting of the book, which played in counterpoint with the present as I dived into bookshops in Charing Cross Road and Cecil Court and finally passed through Covent Garden, where on one day, with wonderful spirit, a comedy quartet were playing Brahms’s Hungarian Dance No.5, to which Chaplin executes a barber’s routine in such perfect time in The Great Dictator. 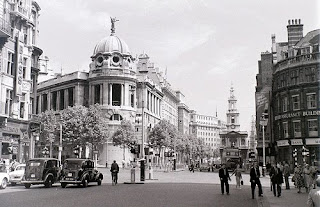 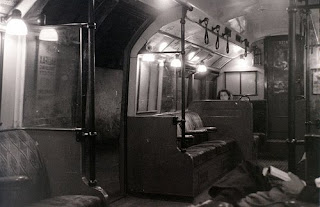 and of the London Underground in the same year.

Peter Wimsey is sixty in the book, so I am many more years too old for him than I was when I played the younger Peter on TV. His voice seems to come easily still; the most challenging thing was the danger of running out of women’s voices. Two cockney ladies with vivid recollections of the Blitz, living in a postwar prefab under a Waterloo Railway viaduct, provided a welcome opportunity to throw into relief a plethora of variegated upper-class ladies, some of them relations of Wimsey – his mother, of course, and Harriet Vane and various cousins. Oddly, I found these women’s emotional passages when they came easier to read and empathize with than the tiptoe badinage. The logistics of some of the sleuthing tired my brain, but it is very clever.

There are readers who go into a studio and read seamlessly with rarely a fluff: there were moments in my  final seven-hour stint with the odd break for coffee when I thought I was becoming catatonic. The director, Neil Gardner, will have a hefty editing job next week tidying me up and excising many fluffs and restarts. I got a Bronze Award for the last Walsh novel I read (A Presumption of Death). I hope for at least Silver this time, and would give half of it to Neil, who listened so skilfully and tactfully every breath of the way, and to the charming engineer.

It is uncanny how wonderfully Jill Paton Walsh has captured Dorothy L. Sayers’s world, as it had been changed by the Second World War, and it was a fabulous excursion to be absorbed so intensely in that world.

In the evenings the bad notices had affected the size of our audiences at the Duchess, but not, on most nights, their delicious humour and enthusiasm. Quite a week – thanks, of course, to those pills I was talking about, and the creative research of my friend who discovered them. 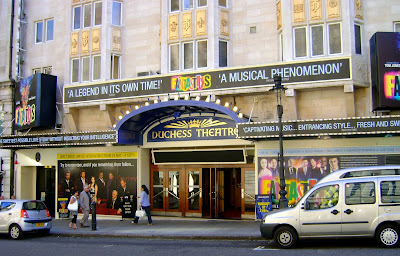