WITH THOUGHTS BEYOND THE REACHES OF OUR SOULS

O good Horatio, I’ll take the ghost’s word for a thousand pound.
I prefer to think of pleasant ghosts at this turning of the year into darkness and cold (though I remember many sparkling winter days last year). 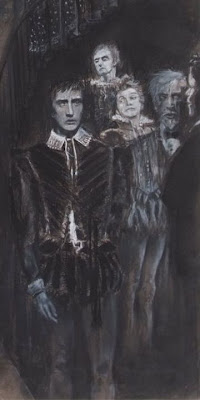 What I call ‘The Hamlet Corner’ – from a charcoal drawing I did in 2000 – seems appropriate and features my transparent Ghost to Alex Jennings’s Hamlet in Matthew Warchus’s production for the RSC in 1997, as well the ‘ghosts’ of performers waiting in imagined wings: Stoppard’s attendant lords, my Guildentsern, John Stride’s Rosencrantz and in the background Graham Crowden, of blessed memory, as The Player. (The full drawing can be viewed in the Image Gallery of my website.)
Warchus wanted Hamlet cut to the bone, lite for youngsters, with the atmosphere of a film. Not counting the opening filmed sequence of me and the Queen in the snow with the ten-year-old Hamlet running in slow motion into my arms (to be reprised at the end of the play), my first appearance as the Ghost was amongst the balloons and streamers of the wedding celebrations, the result of a startling jump cut as the grey wall, on which the film had been projected, cracked open on the Claudius wedding party in full swing. I materialized as the unexpected guest in dinner jacket to Hamlet’s amazement and to everyone else’s too, since they couldn’t see me.
In the closet scene, I wore white pyjamas and a beautiful black shot-silk dressing gown and could almost have entered carrying a sponge bag and a safety razor, a refugee from a Noël Coward production.
I remember being nervous at a schools’ matinée before this particular entrance when we were playing Brooklyn’s huge opera house to a tough audience of local kids. Of course, the audience who doesn’t know the play, or who is young enough at least to be seeing it for the first time, has almost forgotten about the ghost by that time and his ‘domesticated’ appearance, appropriate to the bedroom, did not cause the slightest hint of humour for these youngsters. It was, in fact, a most moving matinée for us. Polonius was shot, not stabbed, through the arras in our production. One would have thought the shootings every day in the streets of Brooklyn and every hour on US television might have desensitized our teenage audience. No. A single boy’s voice called out, ‘Fuck – he shot him!’ and you could still have heard a pin drop. At the end they lifted the roof off: ‘Hamlet, you are THE MAN!’
_______________
Our son Arthur and his actress girlfriend, Rebecca Loudon, got dressed up for a Halloween party this evening and, after I took this snap, braved the Northern Line Tube to Old Street.
I don’t think this photo quite does justice to Rebecca’s serpentine headdress: 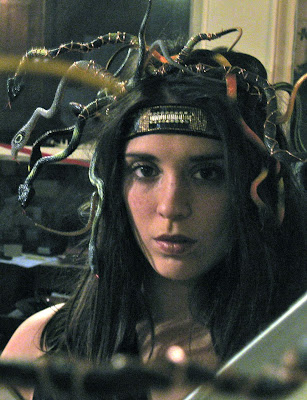 _______________
All Hallows’ Eve
May our Halloween spirits and sprites
Rise not from the depths, but come down from the heights
Cast benign spells and mysteries
Golden tales of our histories
Inspiring our fancy’s fine flights.

2 thoughts on “WITH THOUGHTS BEYOND THE REACHES OF OUR SOULS”