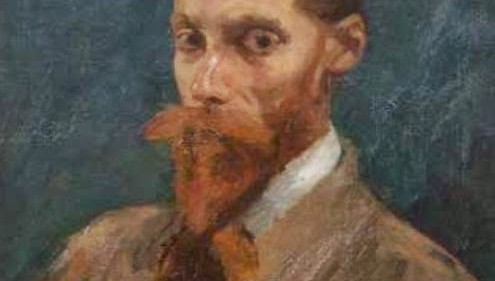 REBELS, POETS AND A QUARE FELLOW

Yet there are times when a deeper need enters, when we want the poem to be not only pleasurably right but compellingly wise, not only a surprising variation played upon the world, but a retuning of the world itself.

In celebration of St Patrick’s Day, a preview of our (Kathleen’s and my) book, featuring just a few of West Hampstead’s notable Irish connections.
The
Dandy of the War of Independence

Long a home for mavericks as well as movers
and shakers, West Hampstead can boast among its former residents a Russian
Revolutionary, a Confederate naval hero of the American Civil War, and a
defender of the Eureka Stockade miners. It is also the final resting place of Edward Darrell Figgis (1882-1925), poet,
novelist, playwright, Sinn Féin activist and independent parliamentarian in the
Irish Free State.
‘His life consists of the stuff of which
fictions and films are made,’ said one observer who studied his short life and
dramatic career. When Michael Collins signed the new Irish constitution in the
Shelbourne Hotel in 1922, the document was largely the work of Figgis. That
same year Figgis was nominated for the Nobel Prize for Literature.
Born in Rathmines, Dublin, not far
from the home of his contemporary James Joyce, he spent his formative years in
India where his father owned a tea plantation, and as a young man he became
immersed in London bohemia before returning to Ireland and joining the newly
formed Irish Volunteers. Figgis had been the main organizer of the famous arms
shipment that was landed at Howth Pier in 1914 and, although he did not take
part in the Easter Rising of 1916, he was one of hundreds of Sinn Féin
supporters who were rounded up in its aftermath. He was interned in Reading
Gaol and recounted his experiences in his book A Chronicle of Jails.
A dandified and fiercely independent
character, Figgis eventually had a serious falling out with Michael Collins. On
13 June 1922, a group of armed men broke into his Dublin flat and in a strange
ritual cut off half his ginger beard in which he had always taken inordinate
pride. A turbulent private life, mired in scandal, led him to take his own life
in 1925. The location of the grave of this founding father of the Irish Free
State was lost for over eighty years and rediscovered in West Hampstead as
recently as 2008.
Dublin’s
Answer to Gertrude Stein

More of a cultural revolutionary, the sculptor,
stage designer and novelist Desmond MacNamara
(1918-2008) lived in a flat at 1 Woodchurch Road, West Hampstead from 1957
until his death. The house had been built by the Victorian painter John Seymour
Lucas, who was also Henry Irving’s costume designer. Early in his career, MacNamara
had worked as prop and costume designer for the film of Laurence Olivier’s Henry V. Before his move to London, MacNamara
had been known as Dublin’s answer to Gertrude Stein, running a non-stop salon in his sculptor’s studio on Grafton Street. In Paris he met Samuel Beckett when
the two of them helped the young sculptor, Hilary Heron, who had been injured
in a motorcycle accident.
MacNamara’s flat in Woodchurch Road was
packed to the groaning Pompeian-red ceiling with artworks, masks, books, and
other memorabilia. His mantelpiece housed a life-size bronze bust he made of his
best friend, playwright Brendan Behan. The two had met as teenagers on a
Spanish Civil War demonstration and Behan often stayed with MacNamara in West
Hampstead, including the time Behan was ejected from Wyndham’s Theatre for
drunkenly interrupting a performance of his own play The Hostage in June 1959.
Among MacNamara’s books were a biography of
Éamon de Valera, an acclaimed book on picture framing and another on puppetry.
In J. P. Donleavy’s The Ginger Man (named one of the 100 Best Novels of the 20th
Century), MacNamara appears as ‘MacDoon. Small dancing figure. It is said his
eyes are like the crown jewels. A sharp red beard on his chin. A Leprauchaun
for sure. Can’t speak too loudly to Mac, else he might blow away.’ And in a
blurb for MacNamara’s Book of Intrusions,
Donleavy called MacNamara ‘the Einstein of Irish literature’.
The
Bohemian’s Bohemian

The West End actress Florence Farr
(1860-1917) was part of a legendary dinner party in Edwardian West Hampstead
and at the heart of the Irish Literary Theatre movement.
Named after Florence Nightingale, Farr was
a ‘First Wave’ Feminist, sometime mistress of Bernard Shaw, who wished to mould
her into his idealized vision of ‘The New Woman’, and a collaborator of W. B. Yeats,
Ezra Pound and Oscar Wilde. She was regarded as ‘the bohemian’s bohemian’ and
was the first woman in England to perform in Ibsen’s plays.
Yeats made her stage manager of the Irish Literary Theatre and said of her: ‘She had three
great gifts, a tranquil beauty like that of Demeter’s image near the British
Museum reading room door, and an incomparable sense of rhythm and a beautiful
voice, the seeming natural expression of the image.’ Throughout the 1890s, he
used Farr’s voice as part of his quest to encourage the rebirth of spoken
poetry. They developed a theory of the music inherent in words, and Farr often
recited to a psaltery, assigning musical notations for the speaking voice. And
it was on one particular evening in 1909 at the home of editor Ernest Rhys, in
Hermitage Lane, West Hampstead, that Yeats and Farr transmitted their theories
to an audience that included Pound and D. H. Lawrence. Quite a good impressionist,
Lawrence’s favourite ‘turn’ was an imitation of Farr intoning the ‘Lake Isle of
Inisfree’ to the accompaniment of an imaginary psalter – something he first
witnessed in West Hampstead in 1909 – a party piece he was still doing in 1927.
Farr gave recitations to poets on a number
of occasions at Hermitage Lane after that. In 1909 she published The Music of Speech and her interest in
the interrelationship of music, poetry and the spoken language made her a
central figure in discussions of poetry during the years before the Great War.
Farr, incidentally, is the subject of
Pound’s poem ‘Portrait d’une Femme’, which is supposed to have influenced or
precipitated ‘Portrait of a Lady’ by another sometime resident of West
Hampstead, T. S. Eliot.
(Research and text by Kathleen Riley)

And finally, also in celebration of St Patrick’s Day, the first of two excerpts from my production of Krapp’s Last Tape by
Samuel Beckett, filmed in Dublin in November 1998:

One thought on “REBELS, POETS AND A QUARE FELLOW”